Today I did all the easily crossed-off things and none of the hard ones, but it's Final Friday and I'm cutting all the slack. It's the Friday of my final week at Dayjob, where I did things for money; they are still paying me, for a while, but I'm no longer doing their things. Parts of today I felt as though doing ANY things had just ground to a halt. But then the sun was fantastic, I got outdoors, and the day crept onward.

I continue to believe, because it is repeatedly confirmed, that on these days when my creativity seems frozen solid, stuff keeps happening below the surface. And tomorrow I have 6 hours on a bus to read and snack and (maybe) get the creation process flowing again.

Did I mention that you can load your own documents onto those e-book things? I have a kindle paperweight that I got for free, and I'm putting all my typed manuscript chunks in it to read on the bus. (You can't edit on them; you can only read. So it's kind of perfect.)

In other tech news, I have no idea why the white backgrounds on these blog posts were not showing up in some browsers. Now we know! I've taken away Filth's lovely rust in hopes of not burning your eyes. But here is his post with all the lovely photos:  http://extinct-flightless.blogspot.com/2013/03/losing-my-electrons.html

Writing is easy and hard. 2014 is my year to dig deep. Habitually, I have cut things short, broken off scenes, stopped at the bottom of a page, trailed off in mid-sentence when I figured the person I was talking to already had the point. In 2014, I plan  to push on, keep going, knock down walls, and finish with finesse.

incipient trajectory 3 & some notes on this blog 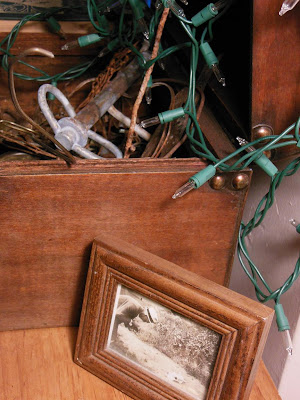 Farewells have begun at my Nearly Former Day Job, where a lovely person (who also most welcomely told me not to be a stranger) has supported my finding that early morning is strangely good braintime. He gets some of his best ideas in the shower. Prescription: long leisurely bathing. So much for my plan to become increasingly disheveled in non-employment! Now envisioning Sagmeisteresque scrawlings in soap on tile wall.

We are still mulling EFAC-on-Twitter-ish notions. Watch this space. (THIS "space.") Social media frustrate me by not letting one filter out retweets/shares when desired. Imagine saying "hi, how are you?" to a friend on the sidewalk and having them silently present you with a stack of novelty greeting cards and newspaper clippings before they reply. All those links may be pleasant and/or useful, but they can also feel like the angry cloud of playing-card men at the end of Alice. I am leaving the Place Of Working For Others; I must learn to be selfish with (more of) my time.

At any rate, expect bloggerel to appear "here" at a somewhat higher rate. In the current arrangement of the Collective, any posts not marked filth or diana-smiles are entirely the fault of the DJH (flightless). It is true that EFAC began as a collective of one, but I'm very fortunate in having dear, supportive, playful, creative friends, and these two have become full-fledged Collectivists. Many other folks also collaborated on the Extinct Curiosities and may pop up here---who can say? I love to showcase the cool things my friends have done with and without me, and we do have a little list of links (not visible in the mobile version, apparently, but on stabile it's over there at the right).

Comments should turn up unmoderated unless the post is older than a fortnight, in which case I have to approve each comment individually, which I will. Say hello! Link us to your art! Object strenuously to my unexamined preconceptions!

Posted by flightless at 9:20 AM No comments: 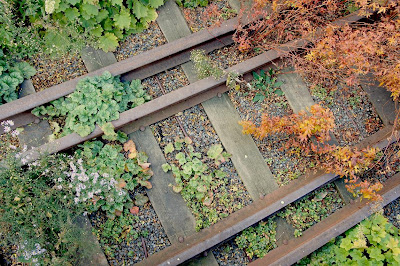 Posted by flightless at 10:40 AM No comments:

Piggy-backing off the art supplies from EFAC’s Cabinet of Extinct Curiosities from Fall 2012 Playa del Fuego, Pigment of the Imagination debuted at Fall 2013 Playa del Fuego in the middle of a Nor’easter.  Mud, mud, mud, and more mud, relentless wind, and non-stop rain could not keep the creative spirit from expressing itself! 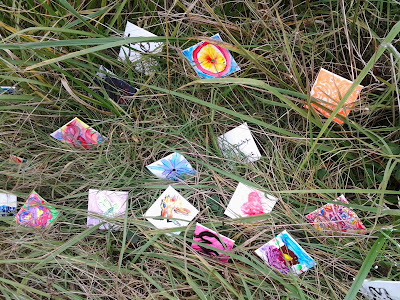 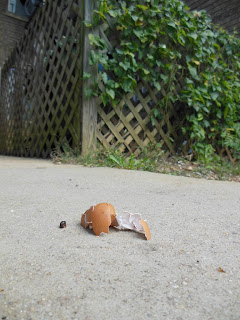 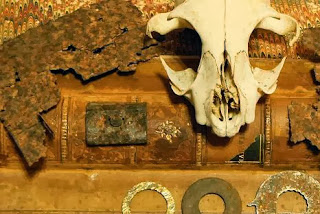 Notes on listening to Kelly McGonigal's TED talk:
CHASING MEANING is better for your health than seeking to AVOID DISCOMFORT.

General principle I learned from Captain Awkward: if a situation sucks for YOU, then it is already broken. You aren't creating a problem; there is already a problem and you're refusing to take it on singlehandedly, in secrecy and silence anymore.

Questions I had written on a small piece of paper without attribution, so possibly they are by me:
WHAT DO YOU FEAR; WHAT IS HOLDING YOU BACK; WHAT IS STEALING YOUR TIME & KEEPING YOU FROM COMPLETING YOUR GOALS?

*Commenters to the last post*, if you send us your details at trepan8 at yahoo dot com, then we will send you your very own physical bit of EFAC art. We will never spam, sperm, or spurn you & will burn your addresses after using them. (Or, um, we'll scramble the electrons irrevocably.) 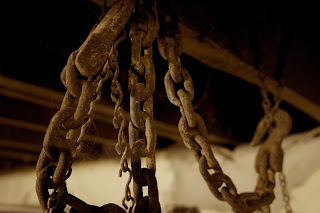 Posted by flightless at 11:54 AM No comments:

Did you find one? Comment here for additional free art.
Posted by flightless at 2:20 PM 2 comments:

I want to write about talking with Amanda Fucking Palmer at last night's amazing house party, but a lot of it was nonverbal and/or needs deeper processing. But it was amazing, and will surely lead to further art mayhem.
Posted by flightless at 4:54 PM No comments:

Then again maybe we won't

EFAC will be *attending* Figment (some of us), but not Doing A Thing At It. It is too hot to think about art. Things to be thought about now are ice and shadows, little caves full of cool damp air, lime popsicles, lazily fanning fronds and ocean breezes. Wax melts; yarn smells a bit funny; metal is too hot to touch. Go take a nap.
Posted by flightless at 9:31 PM 1 comment: 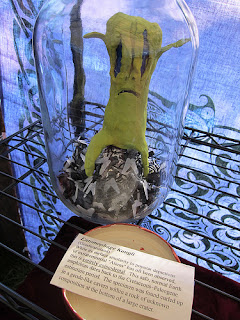 We have an Idea for the Figment DC art thing in September.

We decided quietly, 2 days ago, that it would require lots of yarn. Yesterday a friend of the Collective called us up to say, can I bring you this large quantity of unwanted yarn?

Other decisions are quietly being made. Watch this space.
Posted by flightless at 12:56 PM No comments:

EFAC had another very lovely experience at Playa del Fuego

An alleged 100 xerographic copies were created. As I survey the wreckage, we seem to have 5 full ciggy-box & trading-card compilations and 4 yarnbound zines (also with trading cards) at large in the Aerie. There could, one dares hypothesize, be an additional print run. But also, if you want these? Ask for what you want. 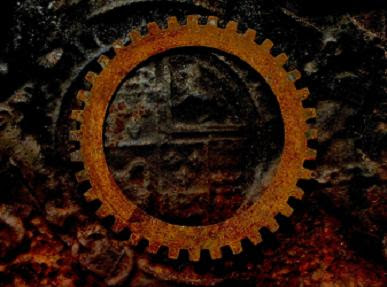 Posted by flightless at 7:26 PM No comments:

The photocopying shop is open until 9, but xeroxing the new zine cannot be rushed. But it IS DONE and ready to copy...tomorrow!

We are going to have some sort of availability of print zines and art-boxed zine/photo sets for the non-Playa Del Fuego attendees as well. Watch this space!
Posted by flightless at 8:42 PM No comments:

EFAC will be at the spring Playa Del Fuego - no big art installation this time, but we will be at Camp Tasty, making art & giving away the new zine. If we ever finish the new zine.
Posted by flightless at 10:02 AM 1 comment:

1. Google thinks they aren't evil, but they still kind of are.

2. We are doing things with: Books. Water. Wax. Rust. (Rusty metal. And taking a saw to the book. These aspects are optional.)

Posted by flightless at 12:02 AM No comments:

Today's art is by Filth. Filth's prior contributions to the Collective have included co-discovery of Hystricomorpha Philthocynia, early documentary photography of the Cabinet of Extinct Curiosities, and endless infusions of enthusiasm. He will answer your questions, read all your comments, and accept submissions of odd rusted metal objects via the EFAC home office. He is not currently a dandy. 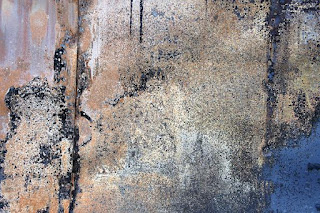 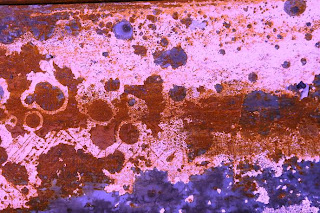 These photographs depict the routine oxidation of metal, paint and other finishes. I couldn't resist manipulating the images (more or less, as the case may be), playing with light and color, to bring out the natural... Why isn't there a word that explicitly means both [flips coin, chaos loses] patterned and chaotic? 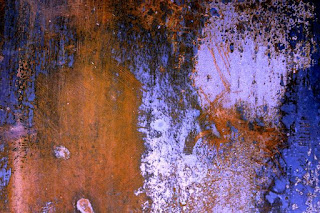 Everything decays, even our dreams. I was born to be a dandy, but look how I turned out. What choice is there, but to accept the inevitable, and allow events to wash over us as metal accepts flame?

[If your connection can take it, click on any image to go to the huge, intensely detailed original.] 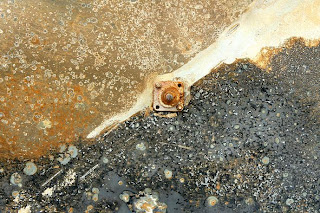 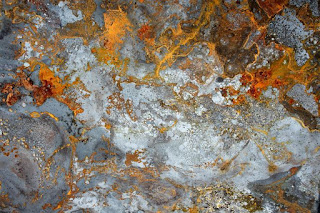 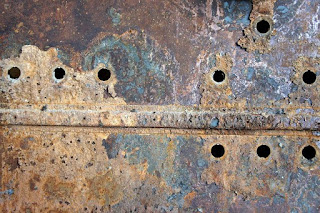 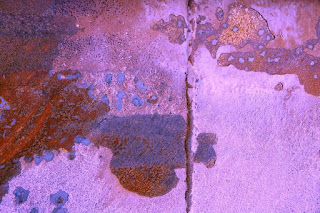 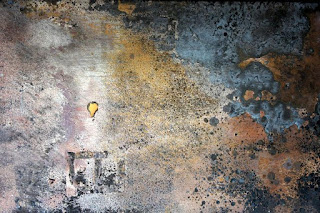 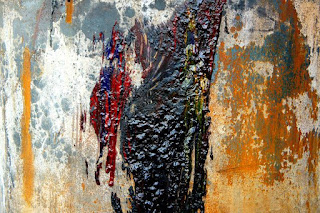 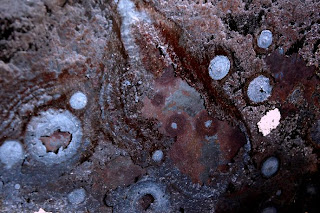 We seem to have lain fallow over the darkest part of winter. What's been growing, down under the crust?
Posted by flightless at 9:38 AM No comments: