It Is the Job of the System Not to Change

NOTE for those using the mobile version: Here is the link to the C.R.Tucker book collection - for sale now! 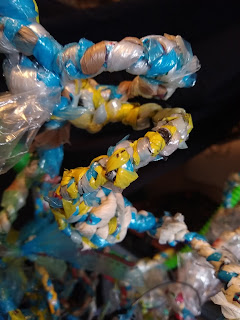 "It is the job of the system not to change . . .
it will try to bring us back into its old patterns."
(Carol J. Adams, Living Among Meat Eaters)
It's official -- there will be no spring Playa Del Fuego (Mid-Atlantic Regional Burning Man Regional event) in 2021. But I am optimistic about the prospects for a second Virtual Del Fuego! I'm already working on a new Thing, playing with notions around mRNA and ecosystems and "viral" messaging...

You can watch this blog for VDF info if and when any arises. (If you follow EFAC in the book of faces, or me on twitter or IG, there will be some sort of notification anytime we have a new blogpost.) There's also another Burner Banter Hour coming up on March 17th.

I was both glad of & nourished by the first VdF, and also felt alienated/sad during parts of it (as, actually, during my one foray out to Burningman Itself). The PdFs I've attended were not complicated in the same way for me, though being sober at one of those is quite complicated in its own ways. (The glee with which a feisty stranger bounces up to me with free booze in broad daylight! The vast incredulity they exhibit [or perform] when I decline!!)
But when I went back to PdF sober, I knew what to expect. Both Burningman and VdF were new things for me, and I did not yet have my personal framework in place.
For VdF the Second, should such occur:
* I will take Diana-Smiles' advice this time and put my art ON the schedule! The website does not emulate a physical "playa" to wander, much as I crave one. I am already conjuring up EVENTS that could be listed in a What "Where" When.
* I will also have a strong Home Game plan. Last spring, my nesting partner was busy with Dayjob, Etc., and was not really interested. And I had phone/laptop/wifi-connection struggles. I have vague ideas about friend's-yard camping or indoor glamping, and I would like to schedule some Camp Tasty bonding time, apart from / in addition to our open events.
* I will (also also!) plan my personal Sobriety-Fest needs. Last year there was a mocktail hour at which (2) people were snide about the very concept. Eff that. I might create my own event (Frenemies of Bill?) or plan to do yoga in the mornings, as a way of saying Yes to my own life rather than just No to various popular substances.
A thing that worked well last time was the Stitch and/or Bitch, a structure I've tried to perpetuate in the months of pandemic isolation since. We got together via Jitsi/zoom, but everyone was also doing whatever crafts or handiwork they felt like doing. Folks could show-and-tell, or not, and if there were conversational lulls, that felt comfortable.
'Cuz like, zoom fatigue is a whole thing. I have more trouble than some folks because the supportive-interruption style of conversing is my default. On a video chat, if I make little noises of agreement or encouragement while someone else is talking, the machinery tends to interpret that as DODO IS SPEAKING! and tries to hand me the electronic Talking Stick -- the opposite of my intention.
And last May I hadn't yet mapped out the Irv's deepest wifi tide-pools, so I kept getting frozen out of the chats I did try to participate in.
So yeah -- next year was better! Next year in person, we DAMN well hope! But in the meantime... see you on the intertubes?
Posted by flightless at 4:34 PM