Welcome to the EFAC Virtual Book Tour event! Tonight's topic is "Women In Lust" -- a topic dear to our Collective hearts, and also the title of the latest anthology edited by Rachel Kramer Bussel (whose website lists at least 43 others).

DJH will be your overly effusive emcee who feels an uncontrollable need to go on at length about the guest of honor's impact on Me Personally. (I may even drop hints about the last time some of our Collective were lucky enough to attend an RKB anthology reading -- one that included live on-stage spankings. (If you are so inclined, you can always read this aloud at home, or in your favorite dungeon... there is spanking in this book too. But we'll get to that.)) I can attest that Rachel Kramer Bussel, in addition to being a warmly open and encouraging figure on the web and print world[s] of erotica, is also warm and encouraging and lovely and entertaining in person.

It is a shame we're not having an actual live reading (and/or spanking). All I've ever wanted of the Web was for it to whisk me through some magic portal into a true shared space, a cozy den in Narnia or wild cafe like the Center Camp tent at Burningman, where there would always be someone awake and intriguing to hang out with. Alas, here in blogland our shared "spaces" are all so flat and cold and pixelated (three words that emphatically do not describe RKB).

I was going to count how many of her previous anthologies I own & adore, but they're mostly in the other bedroom and, well, it gets complicated. But now I see that you all have your cupcakes in front of you, and the bar traffic has settled down, so you're probably getting impatient for the reading to begin. So let me bring out RKB, and a smattering of her sexy co-conspirators. I give you -- WOMEN IN LUST. 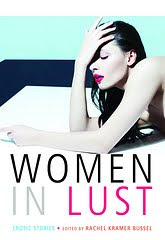 "I’m not wearing underwear in this fantasy because women never do in imaginings such as these."
(Aimee Herman, "Ode to a Masturbator")

There are some very funny moments in this collection of 20 stories; it's not just fodder for dithering, though of course it is that. There are quirky insights into varied womanly perspectives -- how they view cocks and other body parts (including the oft-underappreciated male ass); how they view their own bodies; how they experience desire and relationships and orgasms.

"I know his body so well now, I can feel it when he’s nearing his peak, when his muscles tense and his breathing becomes shallow, and all of my energy is focused on feeling him and hearing his breath, those sensations almost mirrored in my own body. That moment, when he finally releases, when all of his control is abandoned, is always so blissful to me; his spasms and cries and animal roars, like those of a beast savaging me, filling me with such contentment it is almost like coming again myself."
(Amelia Thornton, "Something to Ruin")

RKB writes in her introduction, "we embrace our lusts even when they are maddening, even when they make us do things we might otherwise consider reckless." There is recklessness in this book -- encounters with strangers and with duct-tape and with nettles (brrr) -- though there are also condoms and conversations and solicitations of consent. There are "zipless fucks" as per the Erica Jong definition, and hilarious self-aware interior monologues akin to Jong's own prose:

"You are SO beautiful, Stephanie---"
And this is what happened in my head: now, I know that I am supposed to be a self-actualized woman, and it doesn't matter, or shouldn't, whether a man wants me or not or thinks I'm cute and yes, I know, I'm smart and believe in the power of reasonable footwear and warm clothes in bad weather and I was raised on feminism and will never disavow my own inner strength, but -- and it kills me that this has turned out to be true -- I got so wet when he said that to me, so thick and soft and open, so scared that maybe he didn't really mean it and, oh, I just wanted to quit thinking so much and feel what he was about to do.
(Jen Cross, "Queen of Sheba")

There's even one story ("Unbidden" by Brandy Fox; do we think that's her real name?) that ventures wonderfully into seldom-charted territory -- this reader can remember only one other story, by Michael Chabon, that dared to do this: it describes hot, intimate, passionate sex between two people who are married -- to each other.

I don't know how anyone manages to write erotica without any terrible porny cliche phrases, but (as with the other RKB anthologies I've read), this one did its darnedest. (Apologies to "Ride a Cowboy," but I cannot read the phrase "balls deep" without thinking of Helms Deep and wondering whether they've ever done a sequel to Bored of the Rings.) At least two stories -- "Queen of Sheba" and "Ode to a Masturbator" -- had interesting enough prose that I'd recommend them even on non-prurient grounds, although the latter did take me out of the moment with lines like "She is blonde with enough curves to appear like a cursive lowercase q." It turns out that I have no idea how one is supposed to make a cursive lowercase q, and never did.

There are a few gorgeous descriptions of male bodies here (thank you, Elizabeth Coldwell's "Smoke"!), but I wanted more. Many of the men were invisible ("I hear his zipper, the rustle of fabric") or were merely their cocks and hands, while female narrators lingered over descriptions of their *own* bodies. Sure, that hyperawareness stems from our society's relentless depiction of female bodies as objects of desire, decorative rather than sensory, but I had hoped to get away from that for a bit. But we all bring our brains with us, and one of the most winning aspects of this anthology for me was the moments when it does get intimate with women's squirmy gray matter. I dug the whole sequence in Jen Cross's "Queen of Sheba" about being *looked at*, the uneasy and complicated feelings of a young woman when her male lover is gazing at her naked -- first her whole body, while she resists the urge to pull up the sheets, and then:

"He’d brush his fingers through my thick pubic curls, loosening
the free hairs, and then he’d bend forward, dive in. His
body would sort of fold. He wanted inside me and sure I know
that as a whole person, I didn’t exactly exist anymore when he
got into that wet fleshy focus, but at the same time I knew in
that moment that I was being revered."
(Jen Cross, "Queen of Sheba")

The whole book is fun, though I do recommend getting an actual paper copy and not trying to crash through it in one sitting just because you have a blog post to write. You'll laugh, you'll quiver, you'll turn down page corners. Here is the link.

WomenInLust.wordpress.com If you scroll down, you will find many ways to buy the book. You'll also find longer excerpts. Enjoy!


"I remind myself that I am at work and your wife with inflated lips and bleached teeth is waiting for you in the restaurant. I cannot come. Even in my fantasy."
(Aimee Herman, "Ode to a Masturbator")
Posted by flightless at 2:17 PM

Great review. And hey... I do not underappreciate the male ass.