Breaking free of safety restraints, the Participant lunges for the nearest pack of cigarettes... 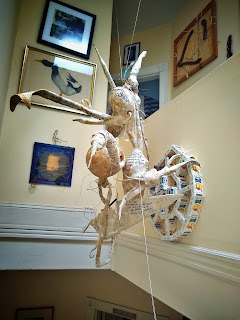 The first Virtual Del Fuego (and, I think, the first-ever official Regional Burningman Event held online) was a smashing success. Servers crashed, wifi went wonky, certain streaming-video plans were kluged together while others (mine) were completely unworkable within the limitations of my various gadgets (and rudimentary tech knowhow). I posted a lot of still photos to the VdF bookface, and I received lovely contributions that I had a great time lettering onto the sculpture. Nothing physically broke -- Monday morning as I struggled to hoist "How Are You REALLY?!" higher and reanchor its lines in a more lasting setup, a screw popped out of the wall. "...REALLY" is now hanging by two threads instead of three, but the southward line is now attached to a heavy pizza iron instead of a stepladder & should last that way for a good while.

Bxiie and Filth's video dance party ended up in a Zoom rather than a Jitsi, which may have discouraged walkins, but it was a fun, intriguing combination of pop/dance music videos with the eerie looping drone footage of their fiery performance art. And EFAC's own Diana Smiles was not only chief instigator and agitator for the virtual burn; she was rightly elected Mayor! Let history show that Mayor Smiles was the one who said fuck the pandemic, we are building community and joy any fucking way. She made it happen.

I still have a lot of white glue. What to papier-mache next?
Posted by flightless at 12:34 PM